Facebook is an online social media and social networking service enterprise located in Menlo Park, California, the USA. The founder and CEO Mark Zuckerberg was a Harvard College student. At the beginning Facebook website was only limited to Harvard students, then for the following years, it became a worldwide social-networking website. The name of Facebook comes from the facebook directories. 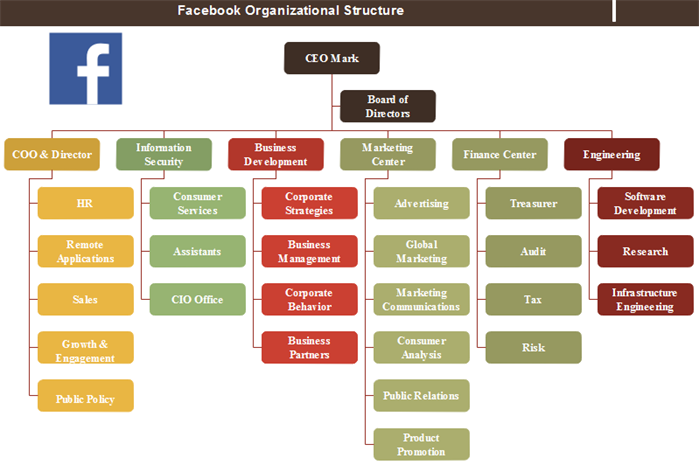 In early 2012 Facebook held its initial public offering (IPO) to sell stock to the public.  In the middle of 2017 Facebook has more than 2 billion monthly active users. It has become the world most popular social networking site in terms of the number of active users. Let’s check the Facebook organizational structure for more insights.

The pattern of the Facebook organizational structure is vertical-based as shown below. The key departments including the Information Security; Business Development; Marketing Center; Finance Center and Engineering. All of these main divisions have a number of sub-groups. For example, for the Marketing department roles cover the advertising team, the global marketing group, marketing communications team, consumer analysis team and public relations. For the engineering part of the Facebook organizational structure, you can find software development, research and analysis and so on.

Mark Elliot Zuckerberg who born in 1980’s is an American computer programmer. He is one of the co-founders, chairman, and CEO of Facebook. In 2016 Mark was ranked by Forbes as the TOP 5 richest person in the world.

Sheryl Kara Sandberg is an American technology executive and author. She is the chief operating officer (COO) of Facebook, and once worked for Google. In 2012, she was elected to the board of directors so became the first woman to serve on Facebook’s board. During the same year, she appeared in the annual list of the Time 100 most influential people in the world.

David M. Wehner is the Chief Financial Officer (CFO) of Facebook. Wehner graduated from Georgetown University with a degree in Chemistry, and he got a Master degree in Physics from Stanford University. Meanwhile, he joined the National Science Foundation. Wehner joined Facebook in 2011 and became the CFO of Facebook in 2014.