The State Department org chart shows the institutional framework of the United States Department of State. It is the leading federal department in the American government. Generally, the State Division has a series of daily duties: suggests the U.S. President to participant international meetings and affairs; builds a good relationship with other foreign nations for international meetings and global issues and so on. Feel free to check the diagram below for more details of the State Department org chart. 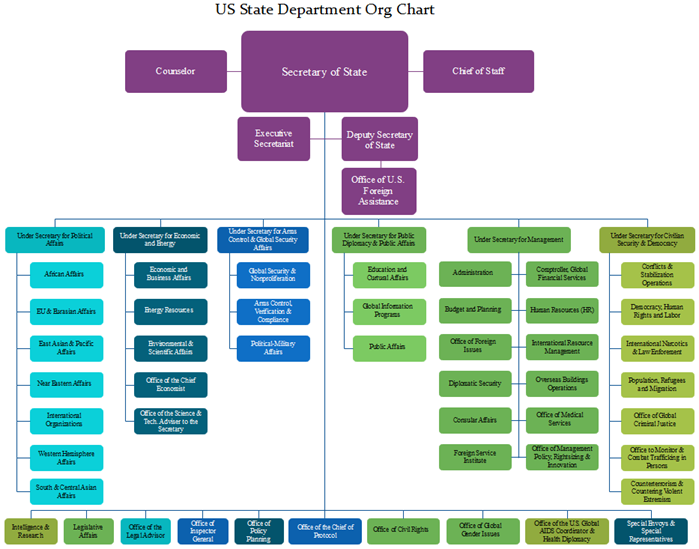 Legal Adviser of the Department of State

Office of the Inspector General (OIG)

OIG operates is an independent office with the main duty to against fraud and mismanagement issues. Every year, OIG inspects a large number of diplomatic files in worldwide areas to follow-up the political goals of the American government. Some other important responsibilities of the Inspector General include monitoring domestic resources to offer useful protection to related sectors and parties.

Bureau of Intelligence and Research (INR)

INR that is shown in the State Department org chart is an intelligence agency. It offers all-source intelligence support to American federal institutions. For example, for some wars in recent decades, INR did research and assessment based on war theory.

Under Secretary of State for Management

This sub-division mainly serves as the top adviser within the State Department of American. It provides solutions for the allocation and uses of the federal budget and assets; does human resource management and carries out daily administration. The Management team is appointed by the U.S. President.

The Coordinator that included in the State Department org chart is responsible for checking international AIDS programs. OGAC leads the operations of many American AIDS emergency plans for international health initiative. So far, such plans have supported worldwide developing countries to fight against AIDS.

Why not Draw the State Department Org Chart?

This article here would assist you: Org chart creator. Alternatively, feel free to use this easy org chart creator for more advanced settings and management of your business teams.