NASA Org Chart: What Is the Organization about?

The NASA org chart refers to the organizational framework of the American National Aeronautics and Space Administration. It is an independent agency of the U.S.A. federal government. Main duties of NASA includes managing and doing researches for a series of projects and programs, such as the civilian space program, or the aeronautics research. For the past decades, the majority of American space exploration events are led by NASA, and the most famous one should be the Apollo Moon landing missions. 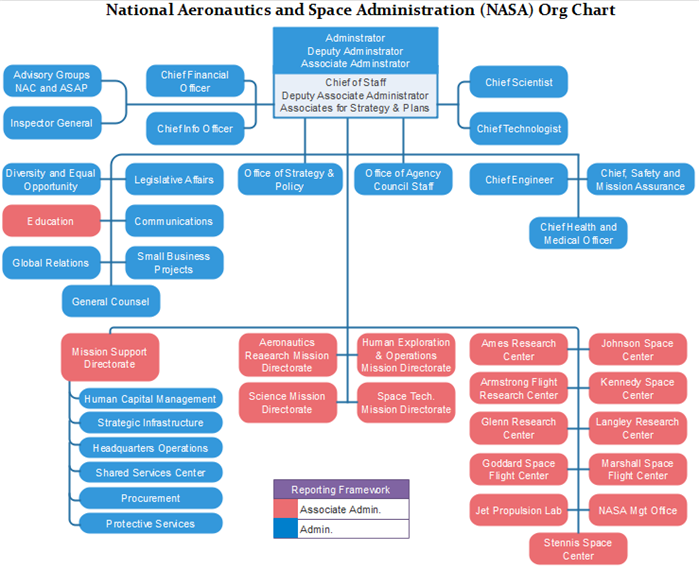 In recent years, NASA is working with the International Space Station for the establishment of the Space System. Some other studies or projects operated by NASA covering: the Earth Observing System, the Science Mission Directorate’s Heliophysics Research Program, the Solar System missions, the Big Bang researching topics and so on. Analysis data are normally shared and discussed by some domestic or global level science institutions. Below you can see a list of some key divisions in the NASA org chart.

The center, which located in California, has a nearly 80-years of history. Main goals of Ames are carrying out space studies and develop public partnerships and spacecraft tasks. The division was involved in a large number of significant events in aeronautics, exploration technology and so on.

The center in the NASA org chart mainly improves innovative technology to advance space missions with many world-class pieces of equipment, like tunnels, drop towers, and research aircraft hangar. So far more than thousands of professional scientists and engineers are working for the center to explore the possibility of highly initiative topics.

The department undertakes any tasks related to robotic space and Earth science. The lab assisted to establish the first earth-orbiting satellite and spacecraft in the U.S.A. The department now has become the world top center for space innovation projects.

The center was set up for building the space systems to explore throughout the solar system. The rocket used on the Apollo mission was designed and launched by the Marshall Center. The division also helped the establishment of the International Space Station.

The facility in the NASA org chart offers support for advanced safety and cost-effectiveness software solutions. In the past years, IV&V has been witnessed a fast development in personnel, capabilities, and achievements. Now the department has over 300 employees.

The center consists of many science technical specialists and engineering experts from industry, universities, and other government agencies. NESC continuously improving engineering excellence by optimizing its processes as well as deepening its knowledge base.

Wanna Find out How to Create A NASA Org Chart?